So here we are, how far we’ve come, the lives lived, the memories shared. Are these Girls Really Golden? Golden evokes royalty, regality, and value. Is this time in their lives the most valuable? Are their puerile hijinks more golden than their years raising a family, living the American Dream?

In this artistic media of a dramatic sitcom series, a second season demands growth, development, a promise to the audience. First seasons are mere introductions to the characters, the setting, and unifies the audience in a general acceptance of the milieu. Will be dig deeper into the psyche of our four disparate muses?

The Girls immediately showcase their believing of the human condition, in exerting their power to manipulate the reproductive choices of minks (species Neovison vison) for the purpose of selling them for their skins, only to be manufactured into the luxuries they themselves covet. In today’s zeitgeist, this would be controversial, but in the Regan era, trickle-down-economical times, this is as perfectly acceptable as, say, a hobby of crocheting or bocchi boll. Dorothy, exerting her dominance over the sexual nature of the beasts, is frustrated that they are not mating to fit her specieist needs.

Meanwhile, Rose, the groups’s imbecilic member, wonders if they have to kill them to skin them. Says the wise elder of the group:

The lack of sexual activity of the minks is a subtle, if not direct metaphor for Blanche’s virility. After missing her period and taking the required test, she announced that she is pregnant. The House Idiot also subscribes to the melodrama, and takes an appropriate reaction for her character’s repertoire.

Alas, who is this Darwinian hero that has planted his seed in Blanche, the woman who defies the norms, who proudly exerts her third-wave feminism sense of sexuality? It could be one of seven or so men, as Blanche had some work done on her tertiary sexual characteristics that week, thus procuring unlimited male attention. 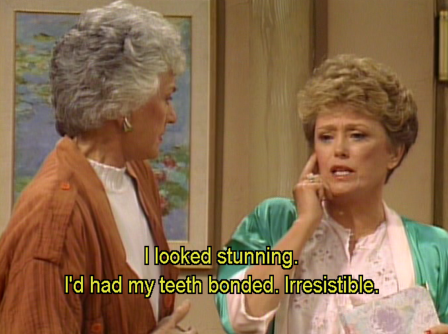 A trip to the local physician confirms what the audience already suspects. Blanche as reached the Great Change. The Female Transition. The Golden Years. Knowing Blanche, she should be thrilled that she can now fornicate without worry or birth control, but she takes it as a sign of worth, loss of sexual capital, a sign of growing old. Furthermore, Blanche ties her identity to her sexual worth, perhaps a symptom of a multi-camera sitcom character, for the simpleton audience, needs to identify each character with a single personality trait.

Blanche assumes the activity of round-the-clock bed-rest, ironically something she would have been required to do if she was with child. Her depression worries the other matriarchs, and they enlist her in a professional assessment with a psychiatrist. 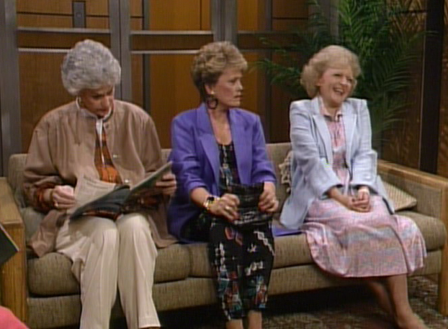 Allow me, dear reader, to take a moment of pause for sartorial analysis. Blanche’s one-piece jumpsuit paired with a blazer is not just stylish and flattering for her, it is a representation of a clash of her womanly identities; the jumpsuit represents her intense and active sexuality, whereas the blazer denotes a business woman; an asexual professional entity’ a woman of a certain age. It is ironic that this is the outfit she chooses to wear to her psychiatrist, whether consciously or sub-consciously, as if she wore the outfit to reveal her very interior conflict without having to orally reflect on it.

In the world of the Girls of Gold, psychiatrists don’t have specialties, receptionists, or any sort of privacy for patients. This current doctor seems to treat both hallucinating schizophrenia as well as post-menopausal women, as witnessed by the brief comedy break in which Rose tries to engage the man with the imaginary companion. This illustrates the 1980s sensibilities and ignorance about mental health, preferring comedy over compassion.

Blanche wanders the office, telling her tale of woe, how menopause is the worst thing that could ever happen to her, keeping in mind that her family most likely owned the most slaves in the southern region at some point; still, her plight of sexual stoppage usurps that revelation. The psychiatrist, armed with his many years of medical training, gives directives. She is still a woman, he insists. Her feelings are invalid. The reason for Blanche’s sad tale of sorrow also seems to serve the purpose of affording a one Rue McLanahan an Emmy nomination.

Back at the residence of Gold, Blanche emerges from her self-incarceration in a robe of many colors, claiming she has overcome her affliction. Ironic is that this is the very robe she will don following sexual intercourse. Blanche credits her friends for her swift recovery, and the gals recount their tales of menopause.

Finally, our story closes with the subject of the minks, as I indicated in the beginning that this was a metaphor. The minks continue to refuse intercourse, prompting the visit of a veterinarian. The pheromones of a male in their residence still sets Blanche’s very much still active loins aflame, and she shimmies up to the vet and offers to show him her mink, metaphorically speaking.

Sartorial sidenote: this man wears a comfy knitted cardigan to indicate his young fashion sense as well as his representation of fatherhood, which further ignites Blanche’s genitals as we already know she has inappropriate sexual emotional entanglements with her father.

And with the promise of a post-menopausal sexual conquest, Blanche’s supposed clinical depression is cured. But what of the minks? Dr. Sexy Vet informs them that the female minks are too old to breed. But Blanche will have none of it! They are still worth something even if they can’t pop out the babies needed for Dorothy and Rose’s evil capitalist plan. Rose wants to keep them, and Dorothy supports a Master Plan to brutally murder them as punishment for not submitting to the human’s will.

As we close, the Gals Gold observe the fornication of two males, only to their chagrin, they are two of the males. As is required of sitcom programs of the 1980s, homosexual references in themselves are comedy, as the laugh track indicates.

30 thoughts on “Season 2, Episode 1; “End of the Curse” as Reviewed By Your Shitty Senior Thesis”